Let's move on to the next part, as I wrote at the in the first article, all cats have a pattern (sometimes two or more) but we will not go into those in this part, different patterns I will address later. In this part we only mention the Agouti gene, it is the trait that controls and tells whether the pattern that the cat carries should be shown or hidden.

Well, after a small side track, let us now sort out some basics and talk about Agouti, this is the trait that decides whether the pattern the cat carries should be shown or if the pattern should be hidden. Agouti / Non-agouti, or in everyday speech patterned / unpatterned or patterned / solid.

Here one must consider that in some colors this trait is more or less transparent, this applies above all to red and cream. Silver and blue might also have some transparency, especially at certain ages.

This means that you will see the pattern on the cat even if it is non-agouti, ie not patterned.
I usually compare red with a glaze and black with a regular paint. If you paint a board with a glaze, you will always see the underlying pattern, but if you paint a board with paint, you will not see the pattern of the board through the paint. In the same way, red tends to act as a glaze and black as a paint.

This is a good example of a solid red cat (ie unpatterned red) with a very clear pattern.
Dagdrivarn Prince Mozez who was aa (non-agouti). 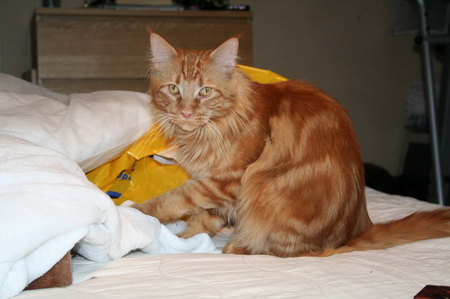 Here you might ask yourself, how do you determine if a cat is patterned or not in red or cream? There are ways to see this, if we only have red and cream, it is a bit easier, if you mix in silver, for example, it might be trickier and sometimes even really difficult. Many times, a DNA test is the only way to be completely sure whether the cat is agouti or non-agouti when we are dealing with these colors.

Below are two red cats, the one to the left is red tabby and to the right a solid red.

Below is an example of one agouti and one non-agouti

In conclusion, I will take some examples of inheritance of the trait.

In this example, we have a mother who is homozygous agouti and a father who is agouti but a carrier of non-agouti.

As we can see above, all kittens will be patterned (remember above, agouti is a dominant trait and it is only required that the cat has ONE copy of the gene for it to be shown). 50% homozygous and 50% heterozygous (ie patterned carriers of the trait non-agouti).

In this example, both mother and father are heterozygous, ie agouti but carriers of non-agouti.

Here the odds have changed a bit, 25% will be homozygous agouti, these will never be able to have an non-agouti offspring. 50% will be agouti but will carry the trait for non-agouti. And finally, 25% will be non-agouti.

In this example, we have an non-agouti mother and a father who is agouti but carries non-agouti.

As you can see above, we here got another distribution, 50% will be agouti but carriers of non-agouti, and 50% will be non-agouti.

Let's take one last example for it to be crystal clear. Both mom and dad are non-agouti.