Within the Maine Coon breed we talk about the clones or the clones percentage. But what is meant by this exactly?

When talking about the clones, we are talking about the 17 descendants of Tanstaafl Polly Adeline or Heidi Ho (Polly) and Heidi Ho Sonkey Bill (Sonkey) born between 1979 and 1982. The reason that they were given the name "clones" is because the kittens looked exactly the same. Just as if they were copies of each other, painted with a different color. These comments were also made when the breeder presented her first litter at a show. Because of this the label "the clones" has remained. Both parents got champion titles added to their names and their first growing kittens did very well on show also. This made the clones in the early 1980's very popular. The similar look of the kittens was very desirable at the time, because the predictability of future good showresults made them very attractive for other breeders. Sonkey and Polly together had 7 litters. From these litters, 17 kittens were used into breedingprograms. Below you can see a screenshot from Pawpeds of the clones. The first colums shows that many of them have indeed obtained their showtitles. 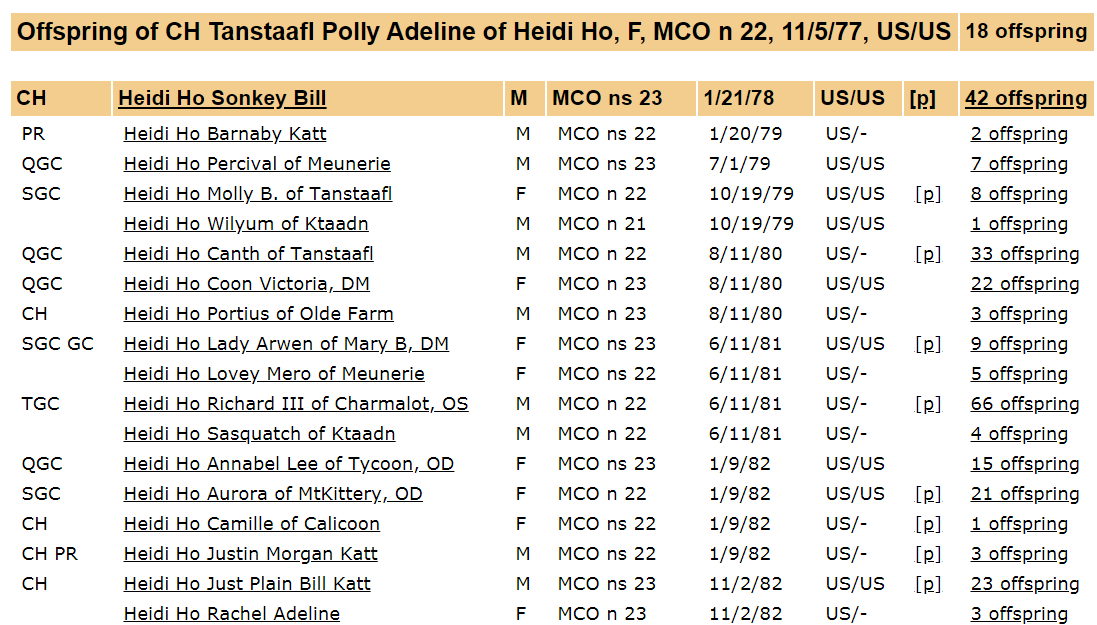 The 17 clones themselves also got offspring; a total of 226 kittens and 1,459 grandchildren. Not all of these (grand) children were used into breeding, but a lot were. You understand that with this enormous high breeding production in combination with their popularity, it results into a major impact on the Maine Coon of today, about 40 years later.

Sonkey - the father of the clones 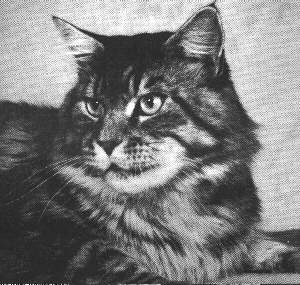 Sonkey had 42 offspring (including the 17 clones). Sonkey also became a grandfather of 404 grandchildren, of which 225 related to the clones. The other 179 grandchildren of Sonkey are from female partners other then Polly. Those 179 offspring obviously have a clones percentage of 0%.

In his pedigree you can see the double ancestors in the same color. This is a pedigree that most breeders will avoid at all times. Still, Sonkey and his clones are found in almost all of the Maine Coon family trees today. Can you imagine that when a cat that has 35% in clones, the pedigree consists for 17,5% of father Sonkey, who is the result of a father - daughter mating, where the daughter is the result of a brother - sister mating. It makes you wonder...

Polly - the mother of the clones 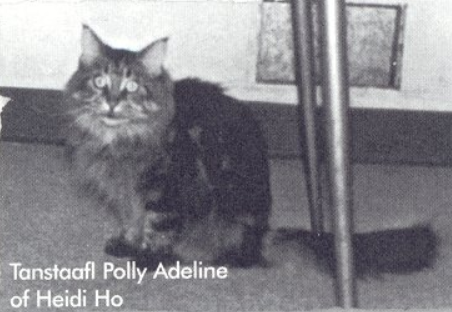 Polly's (Tanstaafl Polly Adeline or Heidi Ho) pedigree consists of fewer inbreeding matings than those of her partner Sonkey. Her total inbreeding percentage is 7.81%. Half of her mother's line consists of Andy and Bridget. But Polly's pedigree also contains the three other foundation cats, which together with Andy and Bridget form the top 5 most common foundation cats. Polly's pedigree consists of Dauphin de France or Tati-Tan for 31.2%.Thanks to Polly, Dauphin is number 3 of the top 5 most common foundation Maine Coons. Followed by Tatiana at number 4 and Smokey Joe at number 5. 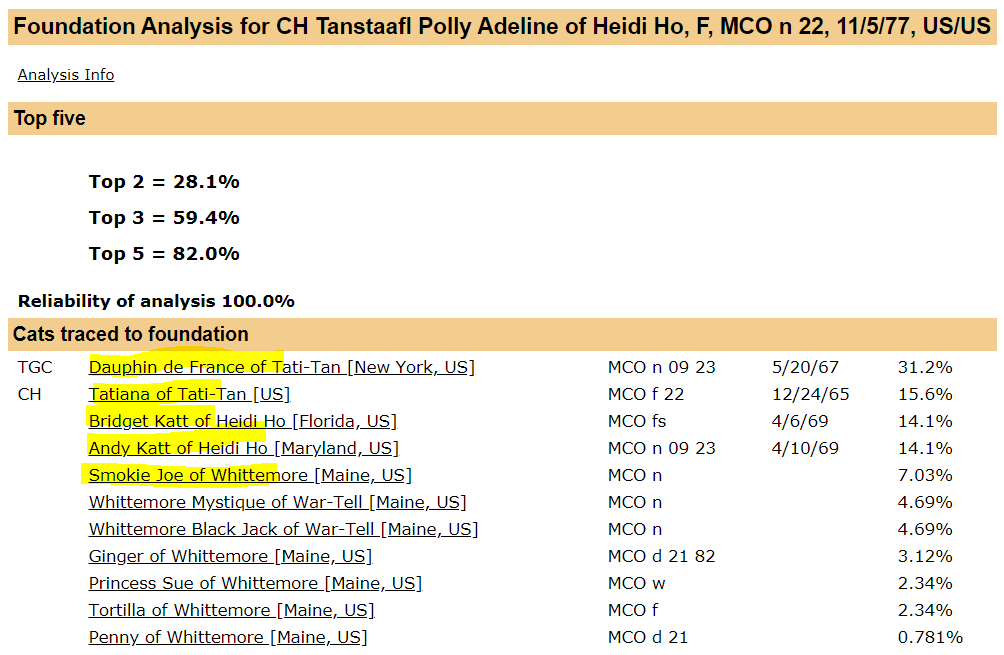 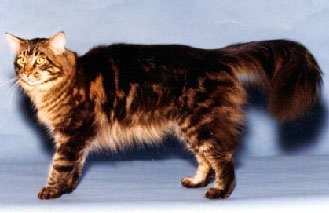 Let's take a closer look at the pedigree of these 17 clones; the kittens of Sonkey and Polly.

The most counted ancestors of the clones (also called top 5 foundation):

Number 4: Tatiana of Tati-Tan is 7,8% of the pedigree of the clones.

Number 5: Smokie Joe of Whittemore is good for 3,52% of the pedigree of the clones.

Now you understand where the top 5 foundation cats came from. The use of the clones in many breedingprograms created this top 5. You will also understand why it is not just a top 5, but the top 3 and top 2 is mentioned separately. There is a big difference between the 32% of Andy and the 3,52% of Smokie Joe.

The impact of the clones today

​Because the clones were born about 40 years ago, it is not something that every current breeder takes into account. The clones are mostly no longer visible in the last 10 generations. Many breeders are therefore not aware of their impact today. The volunteers of Pawpeds have therefore developed the possibility to calculate the clones percentage for each Maine Coon. This way you can see exactly what percent of your cat's ancestors consists of the clones. To see this percentage, click on the "clone" link at the top of the family tree in Pawpeds.

The development of the clones

A Swedish breeder Malin Sundqvist has done research in the Pawpeds database to see the development of the clones percentages in 5 specific years. In the graph you can see her result. The average clones % in 1980 was 2.9% (logical since only a few clones were born in 1980). Clones percentage grows as time passes by. In 2018 the average clones percentage is 34% of all Maine Coons that are registered in the Pawpeds database. The 3rd column compared to the 4th column is also interesting. The third column shows the average inbreeding percentage of only the last 5 generations (line breeding). It is surprising that despite the fact that practically no line breeding was applied in 2018 (there are no or few double ancestors in the last 5 generations), the total inbreeding percentage (4th column) has gone up. There is therefore a clear relationship between the height of the clones percentage and the height of the total inbreeding percentage. This can be explained by the fact that a Maine Coon with a 34% clones percentage consists of at least 34% of the same ancestors. There may be some variation within the clones. For example, a Maine Coon that has 34% clones that consists for 100% of "Heidi Ho Aurora or MtKittery" will have a higher inbreeding level than a Maine Coon with 34% clones where this percentage is more evenly distributed among the various clones.

In addition, a Maine Coon with a high clones percentage automatically also has a high foundation top 5 percentage (the 5 most common foundation cats). Only a small percentage of ancestors remains where unrelated ancestors and unrelated genes can come from.

In the 80's there were many other lines that were used for breeding apart from the clones. Unfortunately, the clones were so popular in that period that many breeders sooner or later added an offspring of the clones to his or her own breeding program. Old lines with a low percentage of clones can therefore hardly be found today. The lines that do have a low clones percentage are mainly the lines to which a New Foundation Maine Coon has been added. By adding new blood to the breeding program, the clones percentage can be drastically reduced.

You may understand that if the current population has an average percentage in clones of 35% or higher, this will result in severe narrowing of the gene pool. The necessity is therefore high to breed with Maine Coons that are as unrelated to these 17 clones as possible.

With an increasingly higher clones percentage, the average inbreeding percentage of the population also rises due to their connection to each other. It will then become increasingly difficult for a breeder to make low inbreeding combinations in the future, because there are fewer and fewer unrelated lines to be found. The table shown and discussed above shows this trend well.

The lines that are still low in the clones are often mixed too quickly and too much with lines that are high in the clones. This is often understandable from the point of view of that one breeder. A breeder wants to achieve his own breeding goals and compensate for the weaker points of the line. After all, there is a lot more availability in the population of high clones lines to find the perfect cat to complement your breeding program. However, the total population of the breed would be better served by pairing lines with low clones to other unrelated low clones lines. This increases the amount of cats that are low in the clones. This helps the total population to a higher genetic diversity. In the future this will result in more opportunities of continuing to make low inbreeding combinations. If there are more low clone lines available it will also make it possible for breeders to reach personal breeding goals and work on a higher diversity at the same time.

In summery: low inbreeding is important for short term health, but a low clone percentage helps to keep a high genetic diversity of the breed in the long run.

In the Netherlands there are very few outcross breeders (who breed with a clones percentage below 20%). Of the hundreds (400-500) Maine Coon breeders in the Netherlands, probably around 3-5% focus on outcross. The Netherlands is no exception here, because this trend is visible worldwide.

With this article I hope to create more awareness about the clones among breeders, so that more breeders want to make this a priority in their breeding program. Not everyone can or wants to work with outcross. It can't even be possible for every breeder to work with outcross, because unfortunately there are too few outcross Maine Coons available due to these trends. But every breeder can take the clones into account in his or her breeding program. Even if it is only a few percent per mating or for every new cat that you buy, every small step helps the breed to a lower clones percentage and higher genetic diversity.

You can find more interesting articles about the clones here:

- The History of the Clones

- Interview with the breeder of the clones, Beth Hicks

- Article about the clones and foundation cats and their history